Atlanta Allergy & Asthma’s Dr. Stanley Fineman Sits on the Board of the World Allergy Organization, Which Marks the Awareness Week from April 4-10 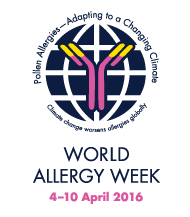 The World Allergy Organization (WAO), an international umbrella organization whose members consist of 97 regional and national allergology and clinical immunology societies from around the world, will address the theme of “Pollen Allergies – Adapting to a Changing Climate” during World Allergy Week 2016 from April 4-10.

Atlanta Allergy & Asthma physicians often receive the question from media members as to why the pollen count seems to grow higher every year. The WAO offers the following explanation, “Data show that carbon dioxide levels in the atmosphere are increasing which leads to overall warming trends; plants are producing more pollen which results in more pollen in the air and therefore increased allergen exposure.” The attribution for that statement comes from a 2013 scholarly article titled “Allergenic Pollen, A Review of the Production, Release, Distribution and Health Impacts.”

“Data show that the pollen allergy season is arriving earlier but is not ending earlier,” said Stanley Fineman, MD. “Each year is different. We are seeing a longer season mostly because of warmer temperatures.”

Atlanta Allergy & Asthma’s Dr. Stanley Fineman, who sits on the board of the WAO, said that he has noticed that locally pollen season seems to be lasting between six and eight weeks in more recent years.

“We have been keeping the pollen count for more than 30 years in metro Atlanta and the numbers do seem to be not only starting earlier but also growing higher than we have ever seen,” he said. “The five highest pollen counts on record have all come since 2012.”

According to the International Study of Asthma and Allergies in Childhood (ISAAC), pollen allergy prevalence in children ages 13 to 14 across the world is 22.1 percent.

The safest way to manage allergy symptoms is to treat them before they begin to manifest themselves. Atlanta Allergy & Asthma’s board-certified allergists are available to discuss this initiative of World Allergy Week and any topic related to pollen season.